Back to all news & Events

When you think how the ocean covers more than 70 percent of the surface of our planet, and 40 percent of the world’s population (2.4 billion people) lives within 60 miles of the coast, it is baffling to know that in this day of advanced science and technology, billions of people still do not have access to safe drinking water, or for basic hygiene at home, or to water their crops. The need for an innovative solution to solve the water scarcity issue is more urgent than ever, which is why the work of the deep tech startup Manhat feels like an extraordinary breakthrough.

The company’s technology is crucial as it is estimated that by 2050, the Middle East and Africa will be home to about 3.4 billion people, propelling the need for increased water supplies, which are already a scarce resource in the region.

Water, water everywhere, yet not a drop to drink

The ongoing lack of access to water is largely because sea water is locked in the form of salty water, relying on desalination to make it usable. Desalination is expensive and has environmental consequences. Only 3 percent of the world’s water is freshwater, and two-thirds of that is trapped in glaciers or otherwise unavailable for use. Rising sea levels coupled with erratic rainfall due to global warming are other reasons for water and food scarcity issues.

Although it has a long coastline, 80 percent of the United Arab Emirates’ land is desert, making it one of the world’s most water-scarce countries.

“The agricultural sector is responsible for two-thirds of all water consumption in the UAE, and we don’t have natural fresh bodies of water. We have underground water which is not sufficient for sustaining our economy because it requires purification before usage. At the moment, the UAE depends on desalination, which is energy-intensive, contributes to CO2 emissions and produces brine,” explains Dr. Saeed Alhassan Alkhazraji, the founder of Manhat and a winner of the Water Europe Innovation Awards 2022.

Dr. Alhassan added another challenge with desalination: “The waste brine is usually poured back into the oceans, which endangers aquatic life.”

A deep tech solution to water scarcity in the UAE

The Emirati-founded deep tech startup has invented a solar water distillation technology that can produce usable water by trapping the lost evaporated water from the ocean. The startup’s solution involves placing a large greenhouse construct on the seashore, then relying on solar rays to heat the water so it evaporates (as shown above). After that, the ascending water vapor condenses when it touches the cooler side of the construct, being collected and stored as distilled water, with no waste, brine or emissions.

This is incredible especially when you realize that the water evaporating from the Arabian Gulf is at least 84 cubic miles (350 cubic kilometers) per year, approximately ten times higher than the total desalinated water produced annually in the region, according to Manhat. 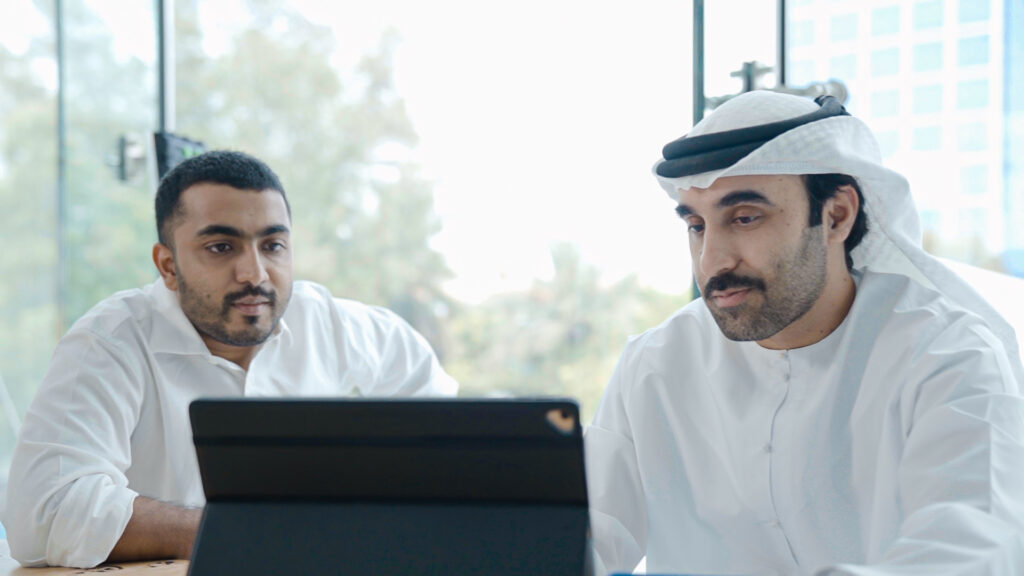 “Our technology is patented, and its novelty is its ability to produce water from open water surfaces (such as seas, rivers and lakes),” Dr. Alhassan says. “There is other technology that has been on the market for decades, but it has limitations including being based on land and producing brine. Since our technology is on open water surfaces, we only capture water vapor which doesn’t contain any salt, so we don’t have to deal with brine which is harmful to aquatic life.”

Manhat has tested various prototypes of its technology both anchored and floating. Both have been deployed around Abu Dhabi in collaboration with Abu Dhabi Ports and the developer group Alreem Island. Anchored devices have been installed into the concrete walls of the corniche [Abu Dhabi’s waterfront], whereas floating devices have been deployed on water surfaces. “We have been able to showcase the water production process without using any electricity, hence, zero carbon dioxide emissions.”